Jassahmi is a new character from my Star Wars The Old Republic fan-fiction series. As of yet her affiliation are unknown (to readers). In this scene, she has been spying on Fane and Talyc’s intimate moment. She is Mirialan.

I used a background from SWTOR, and even adjusting the light and colour, I had to additionally adjust certain areas of the sky that were too bright.

Jassahmi herself was created using an already existing SWTOR character that I went and altered just for a few screenshtos, using a viewer in SWTOR. But I didn’t actually alter the character (that costs Cartel Coins, which I don’t have many of).

The tricky bit here was getting her behind the grass. I had to select the strands and erase the parts of Jassahmi that were “on the grass” to give the “behind” effect.

The goal was for her to be in foliage and in the story she slinks back down. I feel I did not achieve that visual perspective, but maybe that’s just me. You’ll have to let me know. 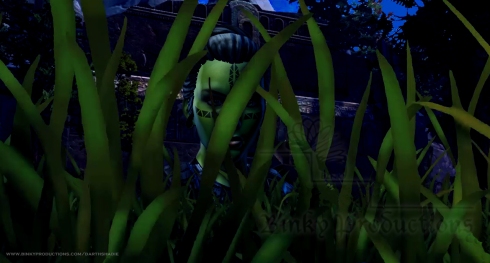 As always, I’m open to feedback.

These images were created for my Star Wars The Old Republic Fan-fiction story, Seekers of Darkness, story 4 in the Darth Shadie / Jedi Eidahs series.

View more cosplay and fanfic photos from Seekers of Darkness.

Binky Productions is a video production company that produces Films, Commercial Videos and Multimedia for artists. Binky Ink is the writing division for freelance and fiction writing, as well as screenplay formatting. Celinka Serre is also a YouTuber for Dragon Age gaming, and Green Healing for alternative and natural healing from abuse. END_OF_DOCUMENT_TOKEN_TO_BE_REPLACED
This entry was posted on Tuesday, March 24th, 2020 at 11:00 am and tagged with cosplay, fan-fiction, fanfic, Jedi, Mandalorians, photoshop, Sith, Star Wars, star wars fan fiction, Star Wars: The Old Republic, swtor, swtor fan fiction, The Old Republic, TOR and posted in fan-fiction, Uncategorized. You can follow any responses to this entry through the RSS 2.0 feed.
« Steel Age Narrative Chronology (Dragon Age Lore)
Getting My A** Whooped in PvP + Quests (Heroes of Dragon Age Gameplay Let’s Play) »