Significance: This one’s an obvious one, as it’s the Class selection for a Rogue wielding two daggers.  How many daggers? Two!  It’s quite literal, if you ask me. 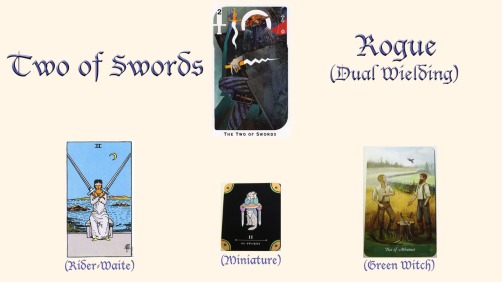 Clad in stripes of nightly blue, the rogue keeps a watchful eye, draped in a cloak to keep himself hidden in shadow, circles marking the flow of life he ends; his companion is stealth.  He wields two daggers, once in each hand; one curved like a serpent that slithers unnoticed towards its prey; the other zig-zagged like a bolt of lightning that strikes so suddenly a killing blow.  Twilit stars in his beard, a wave of red like blood behind him, with a moon full as the darkness that engulfs his enemies.  Another dagger is drawn out on his pointed boot; he always has more, another hidden knife, ready to strike in the night.

What I think this means for DA: Other than the obvious, that it’s going to be a Class option, it gives us a warning, that like an assassin, surprises will creep up on us, and if ill-prepared, could render us incapable.  It could also mean we might see more of the Game, which is quite cloak and dagger, with bards and harlequins.