There are several reasons why you would do your own Sound Effects List, a.k.a SFX List: The first being money. You want to save money to pay your Sound Guy (or Gal). Another reason is the fact that through the SFX list, you get to do part of your Sound Design yourself. Not only does that ensure you get what you want, but also saves on time throughout, because there is less back and forth with the sound studio.

This guide is for those who wish to try their hand at, or to improve at, an SFX list.

As an aside, for those of you who are approaching Audio Post-Production for the first time, the role of the Sound Gal or Guy is to clean the audio, remove any noise, even out volume, make sure all audio has the same quality (you don’t want one scene to sound muffled and the next one “tinny”, in fact you want neither muffled nor “tinny”), to add background ambient sound and room tones, to add Sound Effects. If you have your list ready made, then the Sound Guy or Gal doesn’t need to do it and it saves time in the studio, as mentioned above.

All right, so how can you look like a pro? 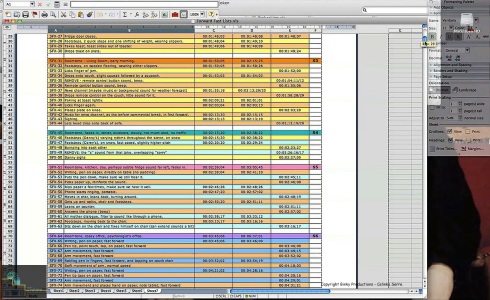 Here you see a first example of an SFX list. I work in Excel; spreadsheets have the kind of layout that work well for this. So let’s go through the basics. You see how all the SFX are numbered, 001, 002 etc. The ones in the example above are already in the hundreds actually.  You’re going to have hundreds of these, literally, hence putting double zeros when you start your list. Then you’ve got the SFX, we’ll get back to those in detail later; you’ve got your In Time and Out Time or your Impact Point. What does all this mean? Some of you might already know. Some sound effects, like roomtones, footsteps, a vacuum cleaner, are spread out onto a long duration. So you’ll enter the In and Out time codes for each. Why include footsteps in this category? Because someone will walk from this time code to that time code. The sound person will be able to then match the footsteps (another part of the sound design) and calculate how many are needed. I often include, if the amount is obvious, the number of steps. And then of course, you have SFX that occur once on impact, like a punch for example. So you’ll write the impact point of the punch. If you have several punches, they are all individual SFX.

Time code. Now, the most effective way is to write the exact time code, which includes: Minutes, Seconds and Frames. However, there is a shortcut, that can save a bit of time and can be done ONLY if you’re in the studio with the sound person: writing down minutes and seconds and leaving out frames. If you’re not there to guide the sound person, they need the full and exact time code for each SFX. I’m always in the studio with my Sound Guy, so I have done this shortcut before on my own projects, depending on the project itself. Seeing as I’m there, I see the approximate time code of minutes and seconds and know which frame it has to be at. I don’t do this on other people’s projects though because depending on the amount of SFX, especially if there are hundreds, you want to be as precise as possible. And I don’t do it on all projects either.  Usually for short films, I will put the full timecode since I won’t go in studio.

Now on to the actual SFX. What is an SFX? Everything. Everything you hear except for music. I include Room tones as well. And it’s important to be very descriptive. So what type of room tone? An office, but is it a busy office, are there phones going off, is it a quiet day at the office, is there chatter going on in the background, etc? What kind of footsteps? Are they on carpet, on stairs, marble, wooden floor, fast paced, slow, syncopated, heavy and tired or light and energetic? Those are all important details and you must include that in your list. The more descriptive it is, the better for the sound person. They will then use their sound design skills and find you the SFX that matches what you want as a given effect. So if your room tone is an eerie ambiance, they’ll find you some options. Being there in studio is important to me because I can right away say: ‘’No, that’s not what I’m looking for.’’; or: ‘’You’ve nailed it.’’. Saves on time and money in the long run to be there.

Also, impact SFX need as much description as all the others. For example: In a fight scene, is the punch to the gut, the face, the side of the head? All that makes a difference. Fight scenes though are pretty intense SFX-wise. There are so many factors to be aware of.

You don’t just have punches and kicks. You have wind before the impact of the punch, which usually occurs right before but pretty much around the same timecode. So you can group these at all the same impact time. Your sound person will know what to do. There is also movement from the clothes sometimes during a fight. You can see all the details from the short fight above. And now all the details from this more elaborate fight below. Everything counts. 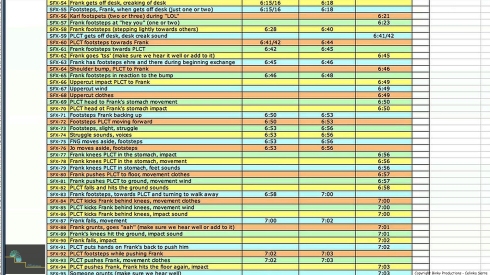 Also, some SFX are already there, from what you’ve recorded on set. They still need to go on your SFX list. Why? Well, they might need to be enhanced to be heard a bit more, either by adjusting the gain or by adding another SFX on top of it to reinforce it. I usually put in brackets something like: ‘’Make sure we hear it.’’ Sometimes with sound cleaning you lose some sounds, all depending. So then if you lost that sound, since it’s on your SFX list, you can hear if it’s lost or not and add to it or add a new SFX, change it if cleaning it made it sound strange, or enhance it. All these details are important to keep in mind. It can seem a little overwhelming at first.  As you go along though, you get the hang of it.

So now some finishing touches. It’s good to colour code your lines. Why? It’s easier on the eyes. When you’ve hit your 5th hour and 300th SFX, the eyes can get confused. Even the most astute brains need a few visual aids. I like bright colours personally, but you might prefer to use just the same two or three colours, or more grey and subdued colours. It’s wholly up to you. In one SFX list, I used a bunch of various colours. In another, I went with one select colour and then variations in the tone or used colours close to it, like blues, or reds and pinks, yellows and oranges, greens, etc. And I change colour groups per scene. I had a bit of fun with the Compiling.tv one. We used pool noodles as props in the web series, so I went by the colour of the pool noodle in the episode to determine the primary colour for that episode’s SFX. Whatever you associate with when choosing your colours, it doesn’t matter. It’s yours, make it so it looks good to you. That takes care of keeping it all organized, thus optimising effectiveness in the long run.

You can view more examples in this complimentary video.

And that’s it folks. If you have any questions regarding SFX lists, you can email me at celinka.serre@protonmail.com. Or if you feel this isn’t your cup of tea and really want someone else to do it for you, well it’s part of the services I offer. Same e-mail to contact me for that too. I usually ask for the total duration of the film in minutes, the genre of the film, and how many scenes you have, which helps determine how long it might take to do the list. Just remember though, practice makes perfect, anyone can master this skill. The more you do these lists, the better you get at them.