Prompted by a cryptic message from her deceased master, Niome, a young wizardess, embarks on a journey to discover many truths. Leaving her country, Teloria, behind, and accompanied by her brother, his best friend, her brother’s master and his best friend, she discovers the prophecies that were written in the stars and dictated by the dragons. Being the guardian of the remaining safe magical book of spells, the Compliment Book, Niome and her companions quickly realise that they must go to the dark lands and retrieve the stolen Book of Enchantment from the evil lord who wishes to rule over all the lands. It is there where their Stardust Destinies are revealed.

Buy your copy in Print or E-book Format

Note: The Distributor has sent out all the necessary to the various bookstores. However, some stores may choose to display some info and/or sell the book/formats at various times.

Read Reviews or Add a Review on Goodreads!

Bring home a piece of the Great Ocean Valley and magic .

Let yourself be enchanted by the fantasy medieval music of the Great Ocean Valley.

Clahria’s Song is now available as a single track in Harp Version. Let yourself be transported as though you yourself were hearing Clahria play her harp. 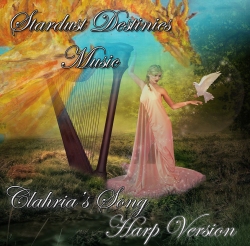 Music in Trailer by Celinka Serre