Relsor and Maranna intimate (from The Future of the Force, Story 9, Star Wars Fan-Fiction by Celinka Serre)


Shadie swayed where she stood; Knarf ran to her side in time to catch her from falling. She looked very pale. Fane was already greatly worried, seeing Shadie weaken did not help.
‘My love,’ said Knarf. ‘You’re shaking.’
Shadie looked like she was trembling uncontrollably.
‘I don’t feel very well,’ she said. ‘I can feel him; I can feel Relsor reaching out to me and finding me. Damn that strange connection between two masters of the Crypt! But I also sense he is shrouded in the Force. I can’t exactly sense him, but I do feel that something fuelled his power and he is capitalising on that in order to gain an advantage against me.’
‘You need to do your thing,’ said Knarf. ‘Don’t let him win.’
‘Don’t worry,’ said Shadie, ‘I don’t intend on dying yet. I just need to rest a bit and gather my energy to focus on those new abilities to refuel myself. It’s a struggle just to do that sometimes.’
‘I understand.’
Fane closed his eyes. ‘I need you, Shadie,’ he said. ‘Relsor is trying to kill you, Awgro is trying to kill Talyc – if he’s even still alive.’ He walked to Shadie’s side. ‘All these Sith trying to kill those whom I love. I need you; you’re like a sister. I lost my only brother to the dark side and death, but I gained a master and a friend.’ Fane took her hand.
‘Don’t worry, Fane,’ said Shadie. ‘I’m not going anywhere. I also believe that Talyc is still alive. His Force presence in the Force can still be felt.’
‘I know, I just… I fear he could be dead at any moment. Just not before we find him,’ said Fane. ‘It seems I keep saving his life, time and time again, and he keeps suffering for it.’
‘That’s not true,’ said Knarf.
‘Had he died on Coruscant… Maybe I am the one bringing all this ill to his life, as he thought when Relsor had confused his mind.’
‘Now listen to me, Fane,’ Shadie said sternly. ‘You are not to blame.’
‘Only thing is, I failed to save his life now and he could be dead.’
‘Listen to my wife,’ said Knarf, ‘we can all still feel Talyc in the Force. He’s alive. Stop these thoughts and fears, you’ll only torment yourself even more.’
At that moment Brenum and Trylia entered, accompanied by Emerick and Lashika. Fane and Knarf greeted them, Shadie remained seated, her eyes closed, focusing; a pink glow surrounded her body.
‘We’ve sent out word,’ said Emerick, ‘and put out bounties on Awgro. We’ve also put out bounties on Talyc with the strict instruction that he is to be brought back safely and unharmed, that this bounty on him is a rescue and comes explicitly from Mandalore himself.’
‘If anyone in the galaxy who knows us sees either of them, we’ll know straight away,’ said Lashika.
‘Mildred has rounded up as many clan leaders as he could to search and find Talyc and Awgro, sending word to any contacts and anyone who owes any of us favours. He also put out word with his old contacts from the Republic from his smuggling days. And heck, even Wapita is pulling his weight in the search.’
‘I feel him alive,’ said Fane, ‘but who knows what he’s suffered, if he’s changed, or if he’ll be the same once we find him.’
‘He’s hardly going to transform into a rakghoul or turn to the dark side,’ said Brenum. ‘He’s going to be the same Talyc, Fane.’
‘A rakghoul,’ muttered Fane. ‘Provided he wasn’t dumped on Taris.’ Brenum smiled sheepishly. Fane appreciated his friend’s attempt to comfort him with a bit of humour, and rakghoul was far-fetched enough that it worked.
‘Mandalore wanted you to know that he has positioned the Mandalorian blockade strategically,’ said Trylia. ‘If that ship returns to Mandalorian space, it will be caught immediately in a tractor beam. Awgro is not going to get away with Talyc a second time.’
‘Here, let us show you,’ said Emerick. He switched the monitor display on to show the blockade. ‘If anything changes, if the ship is seen again here or anywhere else, we’ll be informed.’
Fane looked up at the display, his heart in his stomach, dreading what might happen to Talyc. 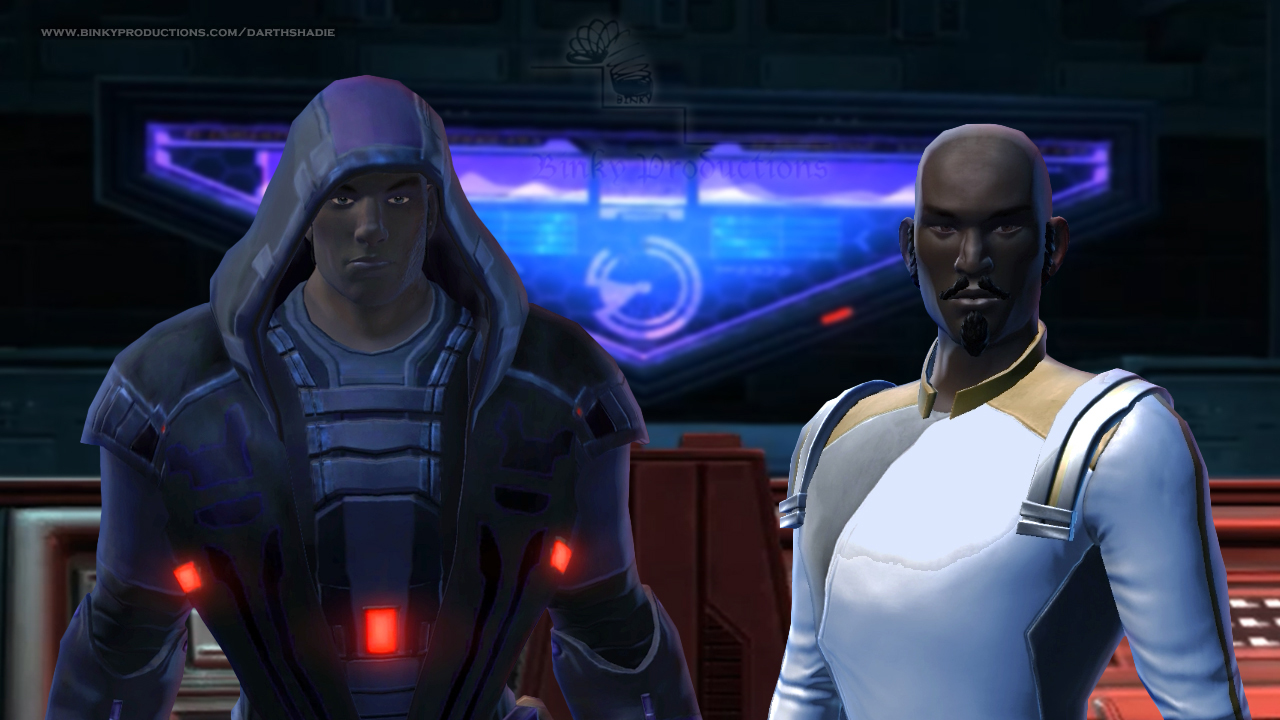 Lord Void and the Minister of Imperial Intelligence on Dromund Kaas (from The Future of the Force, Story 9, Star Wars Fan-Fiction by Celinka Serre)


Knarf observed Fane as he stared at the monitor display. It was as though he had not moved in days, not since Emerick had shown them the holo display of the blockade, and the Mandalorian blockade had not changed either.
Knarf couldn’t help but feel chagrin. It had been days and nothing had been found: no trackers, no datapads, no clues as to where the ship had gone. It hadn’t even left a signature when it had gone into hyperspace. Knarf had sliced and resliced over a dozen devices over a dozen times already, from the Holonet to the blockade ships hyperspace signature detectors.
They had stared at the monitor display of the blockade every day, restudied what they had every day, every time hoping something new would show up, but the results were always the same, and there was never any news.
Shadie stirred. She was lying on the lounge, resting.
‘My love,’ he walked up to her. He took her hand. ‘How are you feeling?’
‘As though a bantha’s sitting on me,’ replied Shadie.
‘That’s my Lady.’ Knarf kissed his wife.
The holocom chimed a few times. Everyone looked around.
‘Incoming call from…Dromund Kaas?’ said Fane.
Knarf helped Shadie sit up as Fane took the call. He was surprised to see Lord Void, who was now the Head of the Dark Council, and the Sith was not alone. A tall bald man with a moustache stood next to him; his posture was impeccable, and this told Knarf this man was of high rank in the Empire.
Fane took a few steps back from the holoscreen. ‘Can we help you?’
‘Lord Void,’ Void said carefully, ‘and the Minister of Imperial Intelligence. We contact you because it appears there has been a misunderstanding of sorts.’ Knarf looked at Shadie, puzzled.
‘We would like to speak to the second leader of Clan Kandera,’ said the Minister. ‘One said Agent Knarf.’
Knarf stepped closer, looking at the others. ‘I’m the second? When did that happen?’ Brenum shrugged. ‘I am Agent Knarf.’
‘Good,’ said the Minister. ‘You see, an agent of mine was commissioned by Lord Void’s apprentice for a mission. However, Awgro has gone rogue and is no longer recognised as a Sith of the Empire.’
‘He is acting on his own accord and against the best interest of the Empire,’ said Lord Void. ‘Thus the Dark Council has decreed him exiled.’
‘What does that have to do with us?’ asked Brenum.
‘My agent reports finding Awgro draining Clan Leader Talyc Kandera of his life force. He saved his life.’
‘Then where is he?’ asked Trylia.
‘I must apologise for Cypher Five’s behaviour,’ said the Minister, ‘but he decided to bring Clan Leader Talyc Kandera to Dromund Kaas in order to keep him safe from Awgro.’
‘Wait, Vax?’ said Fane, sounding menacing. ‘Vax took Talyc?’
‘If he saved his life, why didn’t he just bring Talyc to us?’ asked Shadie.
‘Cypher Five described it as you failing to protect your clan leader from Awgro on Mandalore, therefore he wanted to protect him himself,’ the Minster continued.
‘Hang on a minute,’ said Brenum, ‘are you saying Vax returned to Dromund Kaas without Awgro?’
‘That is correct,’ the Minister replied.
‘That means he’s on Mandalore,’ said Shadie.
‘I am prepared to negotiate a truce with Mandalore,’ said Lord Void. ‘We do have a common enemy in Relsor, and now in Awgro. We are prepared to allow you to come for Talyc Kandera. Agent Knarf, you and Shadie are purely Mandalorians now, is that correct?’
‘Yes, we left the Jedi order a good number of years ago now,’ said Knarf.
‘Good.’ Lord Void steepled his fingers. ‘The thing is, the Empire remains enemies of the Republic, and the Dark Council does not want any Jedi to come with you.’
‘That’s okay,’ said Trylia. ‘We need to stay and search for Awgro if he’s still on Mandalore.’
‘Lord Void,’ said Fane, ‘would the Empire make an exception for one Jedi?’
‘It depends on the nature of that Jedi,’ replied the Dark Lord.
‘Talyc is my… I am a Jedi, but also Mandalorian. I would like an exception to be made for me.’ Fane looked down from the monitor, then up again. ‘Would you grant such an exception for he who is to destroy Relsor?’
Lord Void thought a moment, then nodded. ‘There are many who would relish in meeting the Jedi who is meant to destroy Haar’elso’rothmor. I will grant that exception for you, but for you alone.’
Fane sighed in relief. ‘Thank you.’ He closed his eyes.
‘Lord Void, Minister,’ said Knarf, ‘you can expect Shadie, Fane and me to arrive as soon as possible; we will depart shortly.’
‘Excellent,’ replied the Minister. ‘Your ship will be impounded and locked down during your stay while we negotiate the details of our truce, as is standard procedure.’
‘With all due respect,’ said Shadie calmly, ‘my ship is a meditation Sphere, it does not take kindly to strangers.’
‘Ah. Very well,’ said the Minister. ‘We trust that you will respect the laws of our Empire.’
‘Make no mistake,’ said Lord Void, ‘that while we are willing to ally with you, while you are in Imperial Space and on our planets, you will be under scrutiny. Any wrong move and you will be deemed the enemy again. If you try anything sudden, then Clan Leader Talyc Kandera will become our prisoner, as opposed to simply being in our care. Do you understand?’
‘We understand,’ Fane said gravely.
The call ended.
Knarf let it sink in: Talyc was alive but in Imperial Space, taken by the very Cypher Agent who had captured Trylia, and Talyc had named Knarf the clan’s second leader.
Fane, who looked as pale as Shadie did, slowly moved to the lounge and sat next to Shadie. She took his hand.
‘It’ll be all right, Fane, I promise.’

Disclaimer: The Characters in this Fan-Fiction are new and have original names. The story is an original written work. The story is derivative and consistent of Fan-Fiction since it borrows the franchise world of Star Wars. Certain jargon and places, or concepts mentioned, along with the SW Old Republic universe belong to Lucasfilm Ltd. and Disney. No characters or story lines from the films are used. No story lines or characters from the games or books are used. A handful of characters from the games may be referenced, but are not the main focus in this fanfic story.  This fan-fiction story falls under Fair Use.

This is a work of fiction. Names, characters, places, and incidents either are the product of the author’s imagination or are used fictitiously, and any resemblance to actual persons, living or dead, events, or locales is entirely coincidental.