This character is a bit of a throwback, since he last appeared in Story 1 of my Star Wars Fan-Fiction SWTOR stule, Old Republic era story. Darth Lahnius was a powerful apprentice to Darth Kromus. He was ordered to destroy Shadie and at the end of their duel (spoilers) Shadie stabbed him with her lightsaber and left him for dead as the cave around them crumbled. She and her friends got out of there ASAP.

If you’ve read the series stories (uploaded thus far there are 5, though I have written a lot more), you’ve learnt that Lahnius was Fane’s brother, Fane who was a Jedi and avenged his brother’s death with an unfortunate dip to the dark side before his exile to Mandalore. 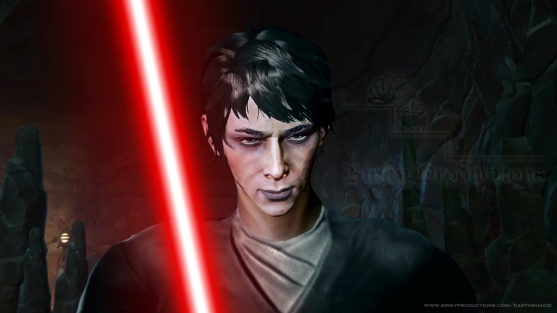 At the time, I did not have an image for Lahnius, my Photoshop skills were not up to par. In a few years, I have no doubt I will be able to do even more to depict my characters. It happened I wanted to experiment with creating Dark Side Corruption. Darth Lahnius, at this time, has mild Dark Side Corruption.

Having siblings of my own, and being constantly told we look alike, aside from a few features that are different, I chose to use the face of Fane to create my Lahnius. I use an Inquisitor from Dragon Age: Inquisition for Fane’s face. I took a screenshot where he looks like an angrier and gruffier version of himself.

In Photoshop, I removed freckles, added blemishes, added dark streaks on his face, coloured in the corruption with a teal and purple hue and then with black. I also darkened the eyes, hair, eye lashes, brows, lips. I would have liked to spike the hair up a bit, but it’s not detrimental to the transformation to make this face look more like Lahnius would look.

Of course, I also put him in Sith gear, with a lightsaber.

I’ve also finally added Chapter Headers to Story 1. It was the only story where I did not have any. I’m glad I’ve done that, it feels more organised to begin a chapter with a header.

Let me now your thoughts on Lahnius. As always, I’m open to feedback. I do have a version with even more corruption on his face, but that will be for a later date.

These images were created for my Star Wars The Old Republic Fan-fiction story, Lady of the Crypt, story 5 in the Darth Shadie / Jedi Eidahs series.

View more Cosplay and Fanfic Photos from Lady of the Crypt

All New Follow-up Backstory: Learn who Killian truly is and how he is deceiving the others with a scene from his past.

Killian’s shuttle landed at the spaceport of Csilla. He had never been before. He’d taken little interest in it or in the Chiss species, but he was an Ambassador for his Lord and their duty was to recruit those powerful in the Force so they could take over the ruling factions of the galaxy.
Killian walked to the holoprojector and hit a few keys. The image of a tall man appeared.
‘Lord Maratel,’ began Killian, ‘I have arrived on Csilla.’
‘I am pleased to hear it, my friend. Our mission is progressing well on my end as well.’
‘I am sure. We will squash the factions who believe themselves to rule this galaxy. We will revive Darth Kromus’s Legacy.’
‘Indeed.