Discover the family of Jedi where one has infiltrated the Sith Order and another has found an until now unknown half brother.

Read about the Chiss siblings who lost everything and have become a force to be reckoned with.

Discover the character who embodies the Dark Side in a way none other does and her non-Force user apprentice who revels in destruction almost more than her Sith Master does.

Discover another alter ego and the white eyed commando Commando.

Taking fan-fiction RP to a whole new level, discover the cross-over character and her Twi’lek counterpart who happens to have the same name as an actual friend from her original realm.

Discover the green skinned Jedi who balances Light and Dark, making passion serene, and the Jedi with many secrets who is named after a mythical planet.

Learn what happened to the other Chiss sibling and who the knowledgeable in the Force Sniper who helped him is.

Learn who Killian truly is and how he is deceiving the others with a scene from his past.

Musings In The Dark

Desmond has disturbing visions, Medeusa senses something darker than herself and Shadiesse recognises someone she can’t remember.

Tiamat’s true identity and relationship with Killian are revealed as the two face off with Desmond and his rage.

Their true motives finally exposed, a battle between Chiss siblings and Dark Side Ambassador ensues as each side vies to destroy the other.

Hawke Is Extracted From the Fade

As a cross-over between SWTOR and Dragon Age, Hawke friends from the SWTOR galaxy use Sith Alchemy to view her world and save her.

What began as an innocent group excursion, ended as an on-going gag that went places no one could foresee.

A little dash of goop over here, a spot of cotton candy over there, how did all this goop come to be!

My Fixation With Czerka 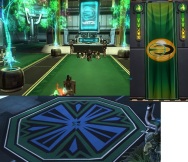