Today is my Together Anniversary with my husband. Nine years together, six years married (in two days). It’s also the anniversary of the fan-fiction I’ve been writing featuring our alter egos who have now become their own characters.

This image is from a larger image with more characters that I’m preparing in Photoshop for Story 5 of the fanfic series, and it was perfect to use as a kind of card to celebrate our anniversary. 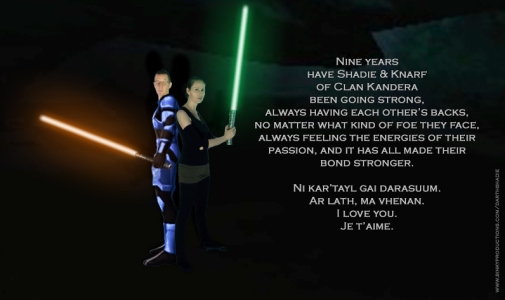 If you’re interested in reading the fanfic series, you can find it here: https://binkyproductions.com/binkyink/darthshadie/

Binky Productions is a video production company that produces Films, Commercial Videos and Multimedia for artists. Binky Ink is the writing division for freelance and fiction writing, as well as screenplay formatting. Celinka Serre is also a YouTuber for Dragon Age gaming, and Green Healing for alternative and natural healing from abuse. END_OF_DOCUMENT_TOKEN_TO_BE_REPLACED
This entry was posted on Friday, June 5th, 2020 at 4:09 pm and tagged with cosplay, photoshop, Star Wars, star wars fan fiction, swtor, swtor fan fiction, swtor fanfic and posted in fan-fiction, Uncategorized. You can follow any responses to this entry through the RSS 2.0 feed.
« Royal Dwarven Nug Recipe In Real Life (Dragon Age)
Possible Companions in Dragon Age 4 From Tevinter Nights »