Relsor is another character from my Star Wars fan-fiction series, which takes place in the Old Republic era. Knarf is Shadie’s husband, human. Relsor, also known as Haar’elso’rothmor, is Chiss, and a True Sith. 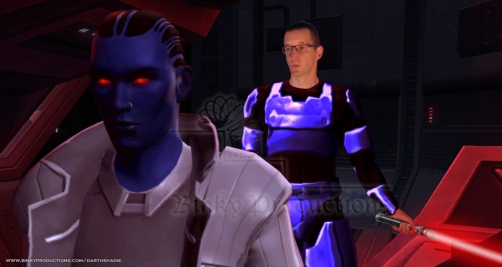 As usual, for Knarf, I used a cosplay picture of my husband, slapped on the armour in Photoshop, used colour replacement tool, and some Puppet Warp and Liquify to get the armour and body in the position I wanted it to be.

For Relsor, I used a screenshot of a character I had previously created in SWTOR. The lightsaber Knarf holds was created with the rounded rectangle tool and a mix of outer glows on a Blade and on a Glow layer. The background is again a screenshot from SWTOR.

A simple image of Relsor, where I don’t remove him from the background and put him on another, is an actual screenshot from the SWTOR game. There is a reason he is captivity here. In the third image, he is in a new background, which I also altered with colour correction and lighting effects. 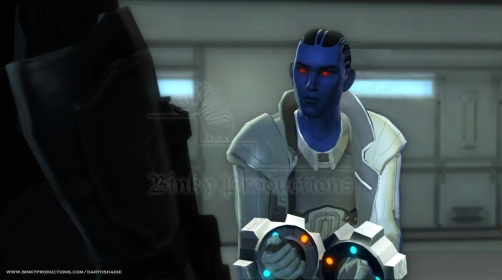 Relsor has got to be one of my more complex characters in this series, with many layers to him, secrets to be discovered, even my him, a complicated past. He’s the main villain in the series for may stories to come.

As always, I’m open to feedback.

These images were created for my Star Wars Fan-fiction story, Masters of the Force, story 3 in the Darth Shadie / Jedi Eidahs series.

View more cosplay and fanfic photos from Masters of the Force.