Good evening, my fellow gamers. I want to announce the launch of my sub-channel titled “Shadie’s Gameplay.” I am in the process of reuploading some gameplay footage to that channel right now. I’ve added channel art and my profile pic, although the official profile pic is taking time to appear as it should everywhere, so you may just see a green icon with the letter S on it for “Shadie”. Though, I must admit, I’m glad YouTube chose green for me as a default haha. 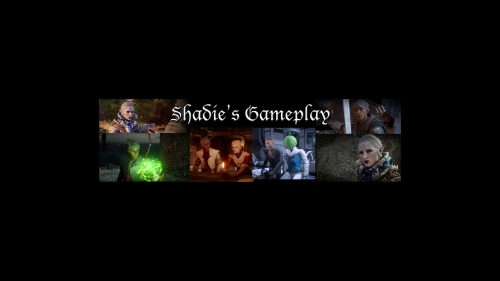 Shadie’s Gameplay is going to feature long form gameplay, cutscenes, Let’s plays, fights, etc. I will continue to post short clips on DarthShadie, and those clips will be featured in playlists on Shadie’s Gameplay. However, the main focus on DarthShadie always has been and will remain theories, predictions, parodies, drinks, and the likes. And mainly for Dragon Age, occasionally for Mass Effect and SWOTR and rarely for other games, such as Fable.

On Shadie’s Gameplay I’ll be transferring my Dragon Age The Last Court narrative gameplay (which I am doing right now, in a few hours, those videos will have disappeared from DarthShadie). I will also transfer all my Mass Effect Andromeda Let’sPlays and GamePlays to that new channel as well.

Eventually, when I am ready to upload footage from some of my DAI play throughs, on Shadie’s Gameplay is where they’ll go.

Oh, and the first link, right after my website link on that channel is…Steem Monsters. I made sure to put SM and Steemit at the forefront. Hopefully we can bring on a few more peeps to this side of the blockchain too hehehe

So stop by and subscribe. It looks rather bare with but a few subscribers. Let’s give the channel some love so I can give it its unique link. Thanks!

Binky Productions is a video production company that produces Films, Commercial Videos and Multimedia for artists. Binky Ink is the writing division for freelance and fiction writing, as well as screenplay formatting. Celinka Serre is also a YouTuber for Dragon Age gaming, and Green Healing for alternative and natural healing from abuse. END_OF_DOCUMENT_TOKEN_TO_BE_REPLACED
This entry was posted on Monday, January 21st, 2019 at 7:37 pm and tagged with Dragon Age, game play, gameplay, gamers, gaming, Mass Effect, swtor, youtube, youtube channel and posted in Gaming, Uncategorized. You can follow any responses to this entry through the RSS 2.0 feed.
« Mage Templar War Tarot Reading (Dragon Age 4 Predictions)
Like It If You Like It – Song and Dance »