Significance: Now, Dorian is not a minion to Corypheus, or to anyone; he does not follow Corypheus, but he is Tevinter.  This suit is linked with Tevinter and with magic as well, and Dorian is a mage.  The fact that it would be him when reconciled with his father is relevant for this suit, as one would share a drink, or simply share, with a friend and not with one with whom we are at odds.  So the cup is symbolic to the reconciliation; to share a cup.

Dorian is a high-minded individual who shows compassion and empathy when he reconciles with his father. 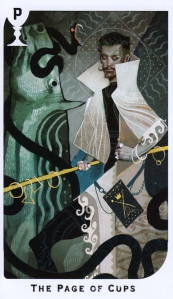 A black snake coils itself around a horse, ready to bite at its victim’s head, yet he stands clad in white, eyes closed, trusting the divinity and power of the magic around and within him, for the serpent’s open hood represents victory; the horse is a symbols of freedom and wisdom.  A dotted circle within a square extends itself by rays, representative of the union between magic and man, much like the hoops on his staff and the other symbols that accompany them, depict the coming together of both the feminine and masculine, intuition and magic, and action and strength.  Frills on his robes resemble ocean waves, water; the rays of the sun, fire; the coiling snake that slithers, on the earth; and the horse’s mane flowing in the wind, air; all four elements, brought together.  Eyes upon his robes indicating how he now sees, understands.  The contrast of black and white representative of the Yin and Yang symbol and the co-existence of shadow and light.

What I think this means for Dorian: Magic is there to serve man, not rule over him, yet his people ruled.  But the solution is not slavery, it’s co-existence, the union of magic and the non-magical, of the past and future, and I believe Dorian can achieve that, or at least help.

What I think this means for DA: Tevinter caused much of the problems in Thedas.  Maybe Tevinter will find the solutions.