Significance: For this one too, I’m not so sure as to why it’s this particular tarot card; perhaps a Mage’s staff is as long as eight daggers.  Or maybe I’m just over-thinking things and they just decided this class fit well with this tarot card.  It could also be because if you turn an eight to its side, it becomes the symbol of infinity; and magic comes from the Fade, which once upon a time gave elves immortality.  Plus, spirits live eternally. 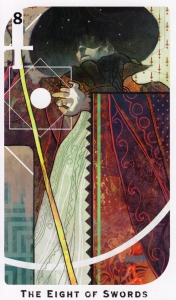 Eyes shadowed by a large nightly hat with glittering stars (upon it), the mage holds a golden staff, a circle with two squares at his shoulder, signifying fullness and virtue.  Swirls and waves adorn the patterns on the Mage’s robes, with deep night colours where magic comes to live.  Yet white-silver flows on the inside of the robe, signifying purer intentions than what many may believe; this Mage is not a blood-mage, but clearly an elementalist.

What I think this means for DA: Mages have always played a major role in Dragon Age and in the History of Dragon Age; from Solas creating the Veil, to Anders starting the great Mage rebellion.  Mages have always been at the forefront of change.  There is no reason to believe that another mage won’t be responsible for another major change, or breakthrough, or revelation.  Much will be discovered regarding mages, and much is yet to come involving mages.