Significance: Empress Celene is the character on the seat of the throne of the Orilesian Empire at the beginning of Inquisition.  Whether she remains on the seat, is another question.  As the character on this card, she represents the Orilesian Empire, also representing Gaspard if he becomes Emperor, or Briala, if she becomes in charge of Orlais, but Celene begins as Empress.  This card encompasses therefore the ensemble of the people who could be ruling Orlais by the end of Inquisition, the ruler of Orlais. 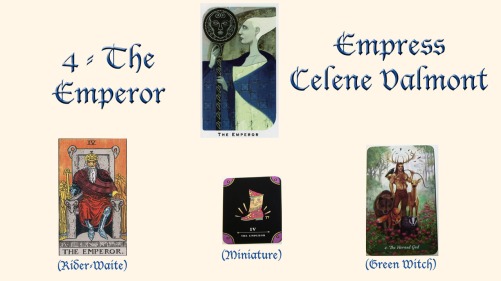 The card itself represents: Leadership, authority, responsibility, the masculine, so warriors, personal power and self-mastery, self-confidence,self-reliance,building projects, endurance and tenacity, protecting what is created, husbandry, etc.

The Empress or Emperor(s) of Orlais does (or do) protect not only their throne, but also the position of Orlais in regards to the rest of Thedas.

Her snow-white hair is up, allowing us all to see the face of the woman in charge at the Winter Palace; her staff mirrors her stoic mask.  More circles mark her blue dress, indicating the long life and enduring strength of the Empire the Empress represents.  The calm of the Sky colour is an indication to the loyalty, wisdom, and trust the Empress brings to her allies, the deepness of the serene watery colour, bringing stability to a place where the Game often causes chaos.

What I think this means for the ruler of Orlais: Whether Celene, Gaspard or Briala ryle Orlais at the end of Inquisition, it is certain they will remain, in my opinion, loyal allies to the Inquisiton, regardless whether it serves the Divine or is disbanded.

What I think this means for DA: Ultimately, Thedas will need protecting in the coming war.  There is a coming war, whether it’s the Blights, a war against Solas, someone else, or even if the Nightmare demon pops out of the Fade, regardless, I believe Orlais, when called upon, will be there to defend their lands.  If restoration is possible in a peaceful manner, they may realise what they took from the Elves and return part of those lands or come to a certain kind of agreement.  It would be nice to see, it would be an interesting possibility to see, a nice outcome, depending on some of the other choices we’ve made throughout the games.