Significance: Red and black markings of his people, horns on his head, a Qunari could be viewed as a demon-like being, just from physical description. 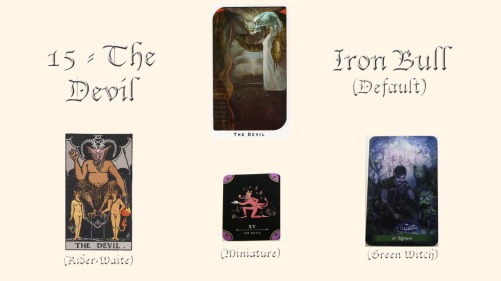 Iron Bull accepts his self-imposed Qun rules, even as a Tal-Vashoth, and he releases some of those that do not work.

His Qunari horns sticking up and out, he stares intensely, looking forward, blood red behind him, a trickle seeps down, a reminder of his ruthless nature.  One eye is hidden, by a skull, reminisce of the symbols of the all seeing eye, he is watching.  The skull itself representing death, bears markings, symbols that represent the earth and its four directions, with other symbols of an anchor; eloquently decorated, it reminds us that he offers us choice.  The curves of his muscles on his chest present a second face, reminding us of the two faces and the two sides for which we must look out, and that whichever direction we go, it will anchor us to a fate, ill or good.

What I think this means for Iron Bull: He is Ben-Hassrath, a spy, he is loyal to the Inquisition so long as the Qun allows him to be.  Whatever choice we made, has anchored him to either to be forever loyal to us or to be forever our enemy.  It may play a role in the next game.

What I think this means for DA: I think this is a reminder that a lot of the choices we made so far will be vital int he next game, and will anchor us to one outcome or another, or maybe several outcomes.  There could also be certain outcomes which may be unavailable to us depending on some of those specific choices.  Good thing I have several playthroughs with alternate choices, just in case.