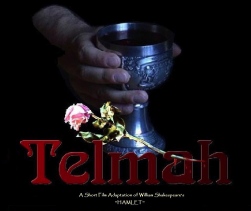 To what depths of despair can betrayal and revenge lead?

An independent short film adaptation of William Shakespeare’s ‘Hamlet, Prince of Denmark’. This is the very first film produced by Binky Productions. Despite all its amateur flaws, it is still a gem, as it gave birth to more professional productions.

Images pieced together accompanying a classical musical piece tell the story of Telmah, the Prince who has seen the ghost of his father. Past and future interweave as the story unfolds: the murder of Hamlet’s father, the betrayal of his mother and his uncle, the loss of Ophelia, the loyalty of Horatio and the anger of Leartes. A fight scene transposed with a dance scene and voice-over reflect the inner struggles of Telmah.