Warning: Contains minor spoilers on class stories and on Shadow of Revan and Fallen Empire stories.

Most of my characters in SWTOR are Light Sided. Even the Dark Sided Jedi are only marginally Dark Sided because they disagree with a lot about the Jedi ways, however, they still serve the Light Side and serve the Republic. To say that Medeusa is completely Dark Side is an understatement. She’s…something else. You could ask my guildies to validate, she is a total and complete (insert B word). She also has this thing against males, aliens and non Force users. If you get three strikes, then you’re out. Medeusa is my Tank, she is a Sith Warrior, the Emperor’s Wrath. She is sporting the Marka Ragnos outfit, with the head horns, which she wears very proudly.

Medeusa is a Sith Pure Blood. Anyone who is not Pure Blood Sith or Human is considered an alien. Strike one. She views women as possessing a better understanding of the universe and of the Force and dislikes how most males have a superiority complex. If you are male, that’s strike two. (No, I do not share her views on men lol although she does represent a darker side within me). Medeusa also believes that only Force users merit existence in the universe and therefore non Force users are walking on thin ice. Strike three. Now you can probably begin to understand why some people just really don’t like her. She doesn’t care who your mother was, Sith on the Dark Council, powerful in the Force or how you came to be, if you are a male, a non Force user and an alien, you better have a darn good reason to be talking to her and for her to not kill you. (I think one of my guildies just recognised a past encounter between Medeusa and his character.)

Being the Emperor’s Wrath, she has a close relationship with him and an even ‘’closer’’ one in Fallen Empire. Her plan is to use him in order to gain control of the galaxy and rule as Empress. She is amused by the fact that he knows this and they could work side by side, but he has a long way to go before she can accept this. Otherwise, she will ensure he is dead and that she rules alone. She will not have a male steal her throne.

As for the name, well, it’s Medusa with an extra ‘’e’’, simply. Being Sith Pure Blood and knowing I wanted her wearing the Marka Ragnos armor set, I wanted to give her a name that would reflect the horns, her terrifying nature, and give her one associated with a mythical character that instilled fear and killed many. Medeusa’s stare can be quite petrifying at times, especially if you’re a non-Force user and small in stature. Just stop in your tracks, and back up slowly, and hope she ignores your presence.

She’s normally not very tolerant of Jedi, but a friend on the Dark Council assured her that they can be aided by some members of the Republic and some Jedi. Although they view things very differently, Medeusa tolerates this alliance. Afterall, times have become desperate and the galaxy needs reshaping. but she won’t let that alliance get in the way of her plans. She also has tolerated Jedi living in HER stronghold, ‘’Medeusa’s Chamber of Deception’’ on Yavin 4. Only because these Jedi believe that both the Light and Dark can coexist and she has taught the Jedi Desmond to use the Dark Side of the Force. Although she disagrees that he uses it only when necessary and he has not completely turned to the Dark Side, his insight has been enlightening, a rare thing for her to find in a male, and his proficiency in the Force has made up for his being an alien.

Kalros is my Bounty Hunter. I named her after the “Mother of all Thresher Maws” from the Mass Effect games. I’m a fan of the name and like the thresher maw. This Kalros, my character, rolls in, guns blazing, destroying anything in her path. She’s all about the credits. She’s ruthless, a hunter and she will cut you down if you get in her way, usually men. Which is how Medeusa was intrigued by the non Force user. Kalros is a Rattataki, but she is also a Mandalorian, which, according to Medeusa, makes up for it. Kalros might not be a Force user but she possesses a raw power, only found in blood thirsty Mandalorian clans. Medeusa had observed Kalros during the Great Hunt and they met for the first time on the Imperial Fleet, literally walking into each other. Kalros to date has been the only person to not react to Medeusa’s Sithness or Force powers and showed no fear. She bit back at her in the same tones, neutral yet challenging but with a hint of pride and respect. This caught Medeusa’s attention.

As far as Kalros is concerned, if you have credits, she’ll let you live. Sometimes, on are occasions, there is a good reason to let you live, other times, she’s just having a good day. And that doesn’t happen too often. Every other time, unless you speak credits, you’re dead. She will honour the Mando code and if you’re her target, you’re dead, no questions asked. There have been a few rare exceptions (I’m looking at you Gault.)

All these reasons make it that Medeusa decided to take Kalros as her only non Force user and non Force sensitive apprentice. Kalros learned to channel her blood thirsty hatred and raw Mando power in a way that gives her an edge. Kalros can channel the Dark Side without possessing any Force sensitivity. She’s well-learned about the Sith and knows the Sith code by heart, she know more than most Masters of the Dark Side do and shows more proficiency to trainers watching her fight than most Force adpet acolytes. She knows how to strike fear in a Sith before even mentioning her relation to Medeusa. She can sound as though she has Force powers, even when her opponents know she does not, they become unsure, for she possesses a sureness and confidence that is unique to Mandalorians. At first she was sceptical about learning with Medeusa, but Medeusa had understood her language, credits, and promised this training would allow her to gain more credits from jobs, which it did. Kalros also is Dark Sided, so her choices mirror many choices Medeusa would make in certain situations, although a little less murderous than her Sith Master and somewhat more understanding in certain circumstances. 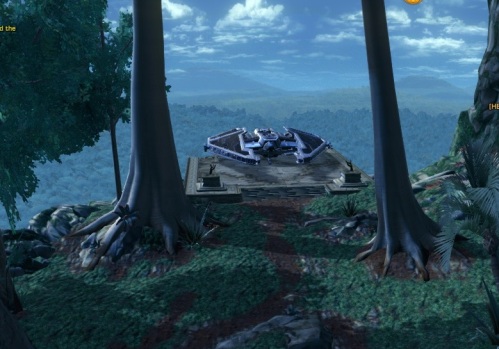 Medeusa did have to face the Lighter side of herself at some point to understand that both light and dark could work together, but that did not change Medeusa’s views on the galaxy. Kalros also has a thing against males and therefore they are kin in that regard. Medeusa and Kalros have a lot in common and Medeusa admits having learned from her Mando friend as much as she has taught her.

Both Medeusa and Kalros live in ‘’Medeusa’s Chamber of Deception’’ as mentioned above. The stronghold has a room for other Mandalorians and Bounty Hunters to gather and exchange goods and show off their trophies. Much farther on the grounds, Medeusa has her own building and Kalros has her own as well right next to Medeusa’s.

In the times of the new alliance, they tolerate the Jedi around them and all the aliens and strange faces, but can’t wait to get to a point where they can shape the galaxy the way ‘’it was intended to be’’.