The following is a Scene that takes place long before Killian meets Medeusa to live in her ‘Chamber of Deception’. It explains who he is and how he is deceiving the others, as well as sets the scene for what will happen next in some future Follow-up Backstories.

Killian’s shuttle landed at the spaceport of Csilla. He had never been before. He’d taken little interest in it or in the Chiss species, but he was an Ambassador for his Lord and their duty was to recruit those powerful in the Force so they could take over the ruling factions of the galaxy.
Killian walked to the holoprojector and hit a few keys. The image of a tall man appeared.
‘Lord Maratel,’ began Killian, ‘I have arrived on Csilla.’
‘I am pleased to hear it, my friend. Our mission is progressing well on my end as well.’
‘I am sure. We will squash the factions who believe themselves to rule this galaxy. We will revive Darth Kromus’s Legacy.’
‘Indeed. The Chiss have informed you of an untrained Force User they wish to present to you?’ asked Maratel.
‘Yes. I don’t quite get their formalities, but I believe they wish for her to become my apprentice.’
‘Well, Killian, you have long since graduated and as your former Master, I urge you consider accepting. You will look more powerful in the eyes of those who follow our cause. Those who follow in Darth Kromus’s footsteps.’
‘I don’t need to prove myself to those minions. I am one of the most powerful Dark Side Force users in the galaxy. ‘
Maratel laughed.
‘Edgy, aren’t we today? Well, I’ll leave you to it.’
Maratel’s image faded out. 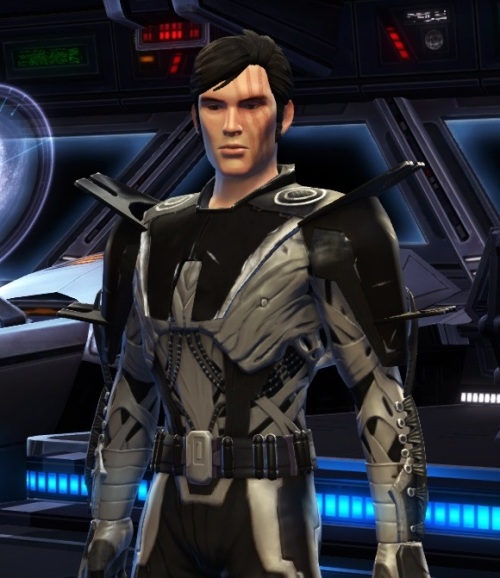 Killian, Ambassador of the Followers of Darth Kromus.

Killian turned to an empty part of his ship and looked about. He sensed a presence flicker in the Force.
‘Whoever you are, I can sense you. Your abilities of Force shroud aren’t powerful enough for me.’
From a dark corner stepped forth a Togruta. She was beautiful, pale, and glowing with dark side energy.
‘You believe you and your Master can rule the rest of us who plot against the Empire and Republic, but you are wrong. I must defeat you to become Maratel’s new apprentice and learn to be more powerful than even you.’
Killian smirked and leaned on the table in the room.
‘Did he put you up to this? You do know I am more powerful than he is, which is why he stopped being my Master. I see his pride is still wounded. A shame I’ll have to kill you now.’
‘I am more powerful…’
The Togruta reached for her lightsaber, but before she could ignite it, Killian pointed a finger at her and she was propelled into the air, choking. He raised his arm and waved it, and she smashed against the opposite wall. She crashed to the ground.
‘You were saying?’ said Killian.
The Togruta pushed at him and he found himself flying across his ship’s hallway. His head hit the wall and he felt a tingle.
‘Now that’s not very nice, is it!’
He sent a stream of dark side energy at her, which she caught on her lightsaber. She leapt at him. He reached for his blade and ignited it just in time to block hers. The white-black of his lightsaber glowed in contrast to her all black blade.
‘Aren’t you one of the chosen to infiltrate the Republic?’ Asked Killian sardonically. ‘You’ll have to change that lightsaber colour. Though I do like its look.’
‘Shut up, Huttslime!’ she cried.
They duelled a brief while. Then Killian had her pinned down, on the ground, his lightsaber pointed directly at her throat.
‘Why are you here?’
‘To kill you,’ she replied.
‘And who sent you?’
‘Maratel.’
‘Wouldn’t you much rather see me defeat him and be the sole ruler of our people and join me by my side as my first Ambassador? I could teach you all I know so you can become as powerful as me, which is more than he could ever teach you, but I will never let you become more powerful than me. You understand?’
She nodded. Killian powered off his blade.
‘Now, let’s begin anew. This time without the ridiculous attempt on my life. I’m Killian, as you know. I’m here to recruit potential allies.’
‘Tassanah, but I will have to change my name because too many run-ins with Jedi in the past have me down on their blacklist. But I was chosen because somehow I cannot use the Dark Side in the traditional way. I can only heal, mostly. That is why I am a good candidate to infiltrate the Republic. Other than risking being recognised.’
‘How then do you expect them to not recognise your face or your presence?’
She shrugged. Killian observed her pale red skin and dark purple lekku.
‘Allow me.’

Tassanah as she looked when Killian first met her.

He passed his hands over her skin, gently touching her face, her lekku and he worked his way down to her feet. When he was done, Tassanah had pale blue skin with greenish lekku. She looked at herself.
‘Hmm, it’s different. It’ll certainly take some getting used to. But I think I like it. How did you…’
‘Simple, really. The Force is an amazing tool when changing the molecular structure of a being.’
They studied each other. Tassanah looked him up and down.
‘Is that how you manage in being so handsome?’ Killian laughed. ‘Except for this part,’ she added, touching his scars.
He abruptly took hold of her hand.
‘Never touch those scars,’ he said, ‘unless I allow it.’ She dropped her hand as he pushed her arm down aggressively. ‘Come, you can accompany me.’
They exited the ship and were greeted by Chiss Ambassadors, who presented themselves and their interest in learning more of Killian’s more-or-less ‘’neutral’ faction, the Chiss Ascendancy not being part of any galactic faction. Killian breathed in the air. It smelled of cold, but he felt little cold, if none at all, using the Force to block out any discomfort his body could feel.
‘It is a rare thing for a Chiss to bear Force powers,’ said the Chiss Ambassador, trying to sound flattering, ‘but we have one who might be of interest to you. Young and untrained, she has shown great power. If you will accept her among your people, we would consider a much more elaborate alliance.’
Killian and Tassanah walked up to the Chiss girl. She bore pink hair. She looked up at him, unintimidated. He liked that. If he was to take on an apprentice, she had to bear worthy traits.
‘So you can use the Force.’
‘Yes, look.’
She struck a lamp post with some lightning, but it barely flared and the lightning was a meager few streams.
‘Well, ambition and determination are a good place to start,’ said Killian.
‘No, I swear, I can do more than that, I’m more powerful than that already.’
‘I’m sure of it. You are eager to show off. I understand.’
‘I’m not showing off, I’m…’
She seemed nervous, impatient. Much like Killian had been as a young boy. She kept trying to send lightning at the lamp post.
‘It’s all right, you don’t need to impress me,’ said Killian, getting impatient himself.  He clasped his hands behind his back and stood, waiting, an imposing figure of the Dark Side. ‘I said: Stop!’ His voice reverberated throughout the spaceport, a deep and dark tone that chilled everyone present, but the young Chiss girl kept at it, wanting desperately to show off her skills.

Suddenly, the lightning arced out from both her hands, an uncontrolled stream of blue-purple electric force that spread out throughout the area and grew larger and larger until there was an explosion and everyone hurled into the air.
Tassanah created a bubble with the Force, protecting herself from the blast. Killian was not so fortunate, yet moreso than the others present. Killian landed on his back, unable to move. Smoke rose from his body, yet he remained conscious. Lightning tingled through his body every now and then, sending shooting pain everywhere. Tassanah ran to his side. The Chiss who were with them were on the ground, seemingly dead. The young Chiss girl was crouched, breathing heavily.
Tassanah helped Killian sit up. He looked at the girl, dread in his eyes. He felt empty. An emptiness he’d never felt before in his entire life. And cold, very cold, and he began to shiver.
‘You,’ he said to the Chiss girl. ‘You are going to pay!’ He reached out with his hand, but nothing happened. He tried again, and nothing happened. He cried out in pain and desperation, rage in his voice, and nothing happened. ‘I don’t know what you did, but you have stripped me from the very thing that I have dedicated my life to. You are now going to die!’
He ignited his lightsaber and threw it in her direction. A crude aim, seeing as he could not control its trajectory. The Chiss girl rolled out of its way and ran off, disappearing from view. Killian tried to call his lightsaber back to his hand, but his reaching gave no result to his intent. Tassanah pulled the lightsaber to her with the Force and gave Killian his lightsaber. She helped him up, he was weak, but he’d been so powerful in the Force, that he had not died. He wondered what he would tell Maratel, how he would fix this. The Chiss would think he had caused those present to die. He looked at Tassanah.
‘Heal me.’ He said desperately. ‘Bring the Force back to me.’
Tassanah looked at him.
‘I don’t know how.’
‘I will teach you. I will teach you all I know, and one day, you will return the Force to me.’
‘I will. I promise. If anyone can do it, it’s me. I will use all the power of the Dark Side in the galaxy to make you whole again.’
Tassanah half-carried Killian back into his ship. He was vulnerable, he was never vulnerable, he hated being vulnerable. The only time he’d let himself be vulnerable and weak in the past had allocated him his scars while taming rancors on Dathomir. Anger swelled inside him and he balled his hands into fists. He took Tassanah’s hand and held it tightly. He looked at her in the eyes.
‘No one must know. No one must ever find out what happened here today. Not until the Force has returned to me.’ Tassanah nodded. ‘I will hunt down that Chiss and kill her.’
‘And I will be there when you do. I will remain by your side. I will serve you.’
Killian realised he was okay with that, he was okay with Tassanah seeing him this way, weak, and vulnerable. He’d just met her, yet he could feel her presence lingering from when he felt her earlier and somehow, he could live with the fact that she had seen him in a weak state. He placed her hand on his scars. He closed his eyes. She leaned her forehead on his.
‘I am emptied. Lifeless without the Force.’
‘I will return the Force to you, I promise, and until I do, I will bring life to you in any way I can. Together, we will avenge what has happened here today.’