Significance: The Moon appears at night, like the swift blade of death, yet brings peace, like the end of hurts.  The moon hides away in the day and some nights, and you may forget about it, just like you might forget Cole. 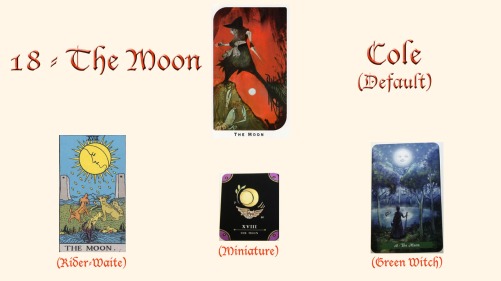 When Cole removes a hurt, especially emotional ones, because he has psychic abilities, it is a mind-altering experience. 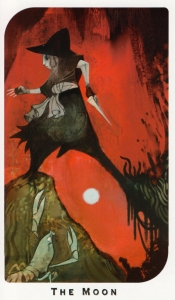 Bounding across mountains, he could be in the Fade; one leg forward, the other behind, his foot lost in dark tendrils of gripping pain.  Set upon a red sky, he holds his knife, ready to end the pain, by killing if he must, to remove the hurts and bring upon death, the night for the waking world.  The lobster that looks up at him represents resolution, transformation, and emotional purity, indicating that it is time to cast off tight-fitting and ill-suited behaviours.  A full moon shines brightly in the background, itself a symbolisation of the conscious and unconscious, which Cole embodies, its fullness representing maturity, as Cole will soon come into his own.

What I think this means for Cole: He is a being who exists a bit in the Fade and in the real world as well, he makes people forget, but we know the Inquisitor will not.  So he may be present in the next game.

What I think this means for DA: I think if we encounter Cole, he will help us remember certain things as opposed to forget.  And we may find him in places where people are hurting and then inexplicably feel better.  What if he helps heal Solas?  What if he helps heal Tevinter?  Those could be interesting possibilities to explore.