Fane carried Talyc to the ship’s med chamber, Talyc hung onto him the whole way, struggling to walk. Fane lay him down onto the bed. He took Talyc’s helmet off, and put a hand on his face.
‘You’re safe now, Talyc, we’re in the Krayt Dragon.’
Talyc had tears in his eyes and felt them trickle down the sides of his face. Fane also had tears. This truly was real.
‘Fane, my man,’ he whispered slowly.
Fane kissed him before Talyc could process anything else. He felt those energies, that sensation that even a non-Force-sensitive could feel, the life of the emotions that he felt for Fane, and he knew beyond any doubt how real this was.
Fane’s face lingered above Talyc’s and smiled, closing his eyes, breathing in deeply.
‘So you rejoined the Jedi Order?’ asked Talyc. He still didn’t quite understand everything.
‘Yes, I did,’ said Fane soothingly. ‘I am devoted to the Order, but I also told them that my heart belongs to another, and that I would honour the love I bear and stay true to it. So we found a compromise, something that works for everyone.’
Talyc’s heart leapt and he smiled, almost laughing in relief.
‘You love me?’ he said. Fane’s smile was the best thing he’d seen in ages. He was so handsome.
‘Talyc, I’ve been in love with you for a long time.’
Talyc felt his smile extend from ear to ear. ‘Same here.’
‘You’ve been in love with yourself?’ said Lian, entering the room. There was a smile on his face and Talyc giggled. The blue Twi’lek Jedi approached and stood behind Talyc, placing two hands on his head. ‘It’s good to see you alive and well. You have suffered a great deal. You are in good hands now.’
‘Where are we going?’ asked Talyc.
‘We’re going to Tython,’ said Fane. ‘We’re going to take care of you.’ Fane took Talyc’s hand. ‘We need to get you out of that armour.’
‘Look at him, Lian, all ready and eager,’ said Talyc, teasing. Fane’s smile truly was the best sight he’d seen in…he didn’t know how long.
‘You need to rest,’ said Lian. ‘I can begin some healing work, but it will take some time for you to heal completely. That is why we return to Tython.’
Talyc nodded, and he relaxed some more onto the bed.
‘You’re safe now,’ said Fane. ‘You’re with me, and I love you.’
‘I love you,’ whispered Talyc, closing his eyes again. He felt Fane rest his head on Talyc’s chest and hold him, and Lian began his healing work on his mind. He felt safe, comforted; and he let sleep take him. 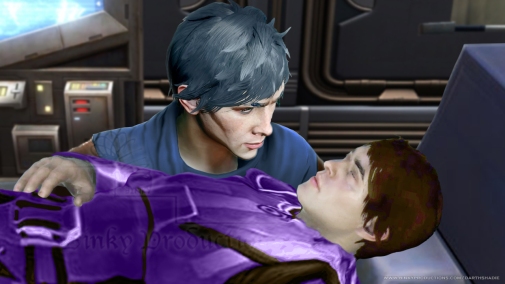 Shadie threw her lightsaber on the floor in front of her. She nodded to the others to indicate to follow her lead. The other three did as their Lady had commanded, they obeyed. She had them well disciplined; they were loyal. Her tactics were different, but it seemed to prove effective. After all, they had all sacrificed themselves and allowed themselves to be captured. It was a shame that Fane and Talyc had gotten away, but that was all right, Relsor had his prize, the most important one, or most important ones. Three of them he could use; Brenum, he supposed he could find a use for him too.
Relsor stared at the lightsaber hilts that lay on the floor. Perce stood next to him in his typical stance, though his disdain for Knarf was ever more apparent. Relsor could not help but feel admiration towards the group; they had accomplished a great feat in succeeding with their rescue mission. They had brought the Jedi Twi’lek, the healer, along. Relsor had no doubt that they had planned to let themselves be captured from the start. They surely hoped to gain something from their time in captivity. Relsor felt reassured that Shadie had not had the chance to reclaim the Crypt, the Sphere had confirmed as much.
Still, he did not want to let them know how pleased he was or how impressed he was either.
He called their lightsabers to his hands with the Force. ‘Do you realise how angering it is that I could not create illusions the moment your ship came out of hyperspace?’ he said to them. ‘Clever tactic to bring your Jedi healer along with you, Lian, the Twi’lek.’
‘At last,’ said Perce, ‘we have you lot. Granted, your apprentice got away with his Mandalorian lover, Shadie, but that’s of little import now. We have you, we have Knarf, we have Trylia, and we have Brenum. And I have Talyc’s mind in mine now.’
‘What did you do to him?’ asked Knarf, angered.
‘Your best friend proved quite clever, and your encryptions were only there to mock me. But I am the one laughing now, for I did to him what I had done to your Republic’s leader. I extracted all that I needed to from his mind.’
‘I’m surprised he survived it,’ admitted Relsor. ‘If he does not get the proper healing, he may yet die. That brings great joy to me to think of it.’ This wasn’t entirely true, but they didn’t need to know that.
‘That’s not true,’ said Shadie after a short pause. ‘If it could have killed him, it would have right away.’
Oh, she knew things; she knew much about the dark side, but she knew nothing of the powers he now possessed.
Jassahmi entered the room and gave Trylia a strange look. This amused Relsor. He noticed Shadie clocking her and observing her.
‘Shadie, meet Jassahmi,’ said Relsor. ‘Powerful in the dark side and potentially more powerful than you.’
‘How does it feel, Jedi,’ said Perce, ‘to realise you have three enemies, not two, and to know that our forces on this ship outnumber you hundreds to one.’
‘It feels like it’s going to be the greatest victory once I succeed in getting myself out of here, given the challenge before me.’ Shadie smiled mockingly.
Relsor laughed. ‘You are accepting a challenge which you have not been offered,’ he said. He shook his head. He motioned with his hand and several metal chains flew to each of the Jedi and bound their hands together. ‘Take them away,’ he ordered.
Similarly to what he knew Lahnius had done to them once before, his Sith used the Force to have the Jedi comply with minimal movements, walking in line, and if the Jedi tried anything else, they would be struck with an invisible force of lightning.
‘Put them in separate cells,’ Relsor added before the Jedi walked out of view. Then to himself: ‘I am going to use them, extract what I need, and then I am going to kill them.’
‘Save Knarf for me,’ said Perce. ‘We are going to kill them.’ He smiled.
Yes, the Jedi didn’t stand a chance. Relsor had them, he finally had them.

Disclaimer: The Characters in this Fan-Fiction are new and have original names. The story is an original written work. The story is derivative and consistent of Fan-Fiction since it borrows the franchise world of Star Wars. Certain jargon and places, or concepts mentioned, along with the SW Old Republic universe belong to Lucasfilm Ltd. and Disney. No characters or story lines from the films are used. No story lines or characters from the games or books are used. A handful of characters from the games may be referenced, but are not the main focus in this fanfic story.  This fan-fiction story falls under Fair Use.

This is a work of fiction. Names, characters, places, and incidents either are the product of the author’s imagination or are used fictitiously, and any resemblance to actual persons, living or dead, events, or locales is entirely coincidental.